An interview with Dr. George Michalidis

An interview with Dr. George Michalidis 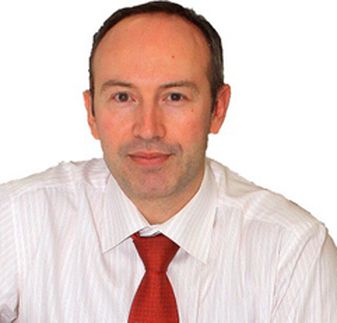 Dr George Michailidis of Genesis clinic in Dubai is known to many multiples families. He managed the pregnancy and delivery of 40 sets of twins and two sets of triplets in 2017 and 2018 looks like it will be a similar number. He is one of the UAE’s top Obstetricians and specialists in fetal medicine and high risk births – so it’s no surprise that my first two interview appointments were cancelled as he had emergency deliveries!

Dr George opened Genesis clinic in 2013, after working at the American Hospital in Dubai as a consultant for four years. I am amused to learn that, like many of us, he first came to Dubai intending only a short visit!

“I had earned my qualifications in my home country of Greece, then moved to the UK where I lived for 10 years and completed my Obstetrics and Fetal Medicine Subspecialty training. As Europe seemed to be facing some financial upheaval I wondered if a spell overseas might be an idea – just as an invitation for a Consultant post at the American Hospital arrived. My wife and I agreed to come for one year…”

Well we are very pleased he has stayed! And, just in case his phone rings and he has to dash off, we get straight to the core of being pregnant with multiples.

What are the most important things prospective parents in the UAE need to know and do?

“A twin pregnancy is automatically a high risk pregnancy. All the main pregnancy complications: for babies, preterm birth and growth restriction; and for the mother, pre eclampsia or diabetes, are more common in multiple pregnancies. If you were to single out one complication over the others this must be preterm birth. Ultrasound scanning plays a major role in the care of multiples pregnancies and helps in ensuring the best care is provided.”

Where you will deliver your babiesA doctor or medical setting with good ultrasound scanning facilitiesYour medical insurance – then start doing some maths!

Planning which hospital you will deliver at may come with the doctor or Obstetrician you use, or your insurance package may dictate which hospitals are available to you. Ideally you want a hospital with a good NICU and you need to know the NICU charges.

Ultrasound, I learn, is one of the two greatest advances in the foetal care profession in the last twenty years (more on the other, genetics, later). So multiples pregnancies ideally want to find a doctor or a set-up where the ultrasound facilities are operated by a good foetal medicine specialist, or there is a good obstetrics scanning department.

Dr George emphasises that multiples pregnancies are going to be costly, and that prospective parents need to have a handle on how any potential expenses are going to be met. You need to know what your insurance will cover and you need a plan for how the costs will be covered should anything change. A night in NICU will cost in the region of three to five thousand Dirhams per baby – and this can also increase significantly in some cases for very pre-term babies (prices from time of writing November 2018). Being on top of the potential costs – and having a plan for how to meet them if need be – is a great start to a multiples pregnancy and can really help mummy by removing worries.

I wholeheartedly agree with Dr George here. My husband and I worked out the costs of a three month NICU stay and the doctor’s fees and delivery fees – and promptly fainted… But we cobbled together a plan of what we would need to sell, borrow and put on credit – and then we moved house as well! The plan wasn’t exactly watertight, but it was enough for that to be one thing that didn’t worry me when my pregnancy took a difficult turn.

Right – so some of the key stuff that we parents can do is clear. Next, what are we going to expect from those critical ultrasound scans?

At your 12 week scan you will be coming away with the finalised dates of your pregnancy, the chronicity of your twins (Monochorionic or Dichorionic, or a combination for higher order multiples, see here for more information), and a plan for genetic screening if this is relevant for your family.

And here Dr George explains that the other major step forward in recent years is in genetics: both carrier screening for parents pre-conception, and foetal testing for conditions such as Down Syndrome. “There are leaps forward in NIPT (non-invasive prenatal testing) and new conditions are able to be tested and ruled out all the time. This area of pregnancy care is only going to grow and improve into the future”. Carrier screening is similarly advancing, with over 300 different conditions able to be tested to determine if a woman is a carrier. Ideally this would be done before pregnancy, but with recent fast tests it can still have value if performed in early pregnancy. It all adds up to having greater information during pregnancy, meaning the medical team can design the best care programme, and us parents are best equipped to make choices if necessary.

Not all pregnancies will require NIPT, but if yours does, at your 12 week scan, you should have a plan for when and how that will take place.

The 20 week scan is an important one to look at the morphology of your multiples. This means checking that physically they are progressing as expected. For our multiples, and our prevention of preterm birth concern, then measuring cervical length should also be done at this stage. At Genesis the cervix is measured from around 15-16 weeks for multiples, so that any shortening is clear. If you haven’t had your cervix measured already, 20 weeks is the time to do it.

Scans from 24 weeks and onwards in a regular pregnancy are for growth surveillance, and will normally take place around ever 4 – 6 weeks. If your multiples pregnancy has shown any reasons to require closer monitoring, or if you carry monochorionic twins, then scans will likely be every two to three weeks from this point.

As well as the scans, in order to provide the best pregnancy care, your doctor or medical team are going to need to know about you! “History is very important,” says Dr George, “medical conditions such as high blood pressure, diabetes, etc need to be highlighted early on.” And this may be the case for husbands, too. He explains to me that the medical expertise of an Obstetrician or doctor is going to be so much better applied if that person knows you, your husband, and all your desires and hopes for your pregnancy and birth.

“It takes time,” emphasises Dr George, “but only when client and medical personnel establish a good relationship will the vital trust develop, that in my opinion, the most stress-free high risk pregnancies require.”

It’s a good point. While a mummy might have strong wishes for a certain approach to pregnancy and birth, we all know that multiples can throw a giant spanner in the works and shatter our plans. At times like this, trusting your medical practitioner implicitly and knowing that they know you very well, is both comforting for parents and the easiest route to maximising everybody’s chances of a straightforward pregnancy and birth.

Dr George says that many of his patients have a desire for a ‘natural’ approach to pregnancy and birth, believing this to be best. He says that he agrees, but his caveat is poignant:

“Nature is the best, but nature can also be very cruel.”

I ask him what we ladies can best do to for our multiples pregnancies. Apart from the obvious looking after yourself, eating and exercising sensibly and the three important areas of consideration mentioned above, Dr George says “Select a medical professional that you can make a connection with.” And then spend time talking with that person, and iron out any concerns or problems or disagreements early on. If you are using a Doula, involve them from the beginning so that the circle of trust includes all the key players. Back to trust again! Are we labouring the point (pun intended) sufficiently? Well, this world-class Doctor clearly sees trust as critical.

What is next for Genesis, I ask? Any plans for expansion? Dr George laughs ruefully “I wish, I could use a rest” and explains that he would love the clinic to be less Dr George-focussed – but that his time to scout out that perfect partner always seems to be cut short…

At this point I decide to conclude our interview too, conscious that this Doctor has come into his clinic on his day off to talk to me and I’ve already been there an hour. Cheekily, on the way out, I ask the helpful Clinic Manager, Elvina, how Dr George is to work with. “I was originally a colleague and a patient of his!” she smiles, “he is a wonderful man”.

Couldn’t put it better myself.

Playing and Development – the Professional Recommends!

Fiona Desira of Child Early Intervention Medical Centre From the very beginning of your journey, being the parent of twins... read more

Interviews With The Experts – Alexandra Sullivan of Little Angels, Love Through Loss

TwinsPlus Arabia ships across the UAE and the Middle East. We offer both courier delivery or customers can choose to collect free of charge from our premises in Umm Suqeim 2 in Dubai. Shipping is...

Cash on delivery / collection (Dubai orders only) Online payment with any credit or debit card (Link will be sent to Whatsapp / Email and processed via a secure online payment gateway)...

You can return an item in original packaging within 2 weeks of receiving your order. To be eligible for a return, your item must be unused and in the same condition that you received it...
[]

All credit/debit cards details and personally identifiable information will NOT be stored, sold, shared, rented or leased to any third parties. Information obtained at our site is encrypted to ensure your security.

SHIPPING / COLLECTION
TwinsPlus Arabia ships across the UAE and the Middle East. We offer both courier delivery or customers can choose to collect free of charge from our premises in Umm Suqeim 2 in Dubai. Shipping is automatically calculated for all GCC countries (Bahrain, Kuwait, Oman, Saudi Arabia). For all other countries please get in touch with us and we will get a shipping quotation for you.